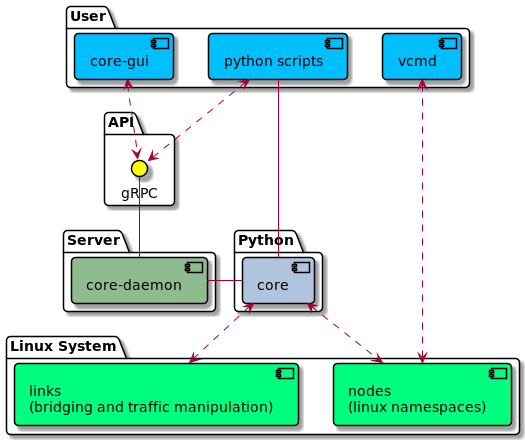 CORE can create and run multiple emulated sessions at once, below is an overview of the states a session will transition between during typical GUI interactions.

How Does it Work?

The CORE framework runs on Linux and uses Linux namespacing for creating node containers. These nodes are linked together using Linux bridging and virtual interfaces. CORE sessions are a set of nodes and links operating together for a specific purpose.

Linux network namespaces (also known as netns) is the primary technique used by CORE. Most recent Linux distributions have namespaces-enabled kernels out of the box. Each namespace has its own process environment and private network stack. Network namespaces share the same filesystem in CORE.

The Tcl/Tk CORE GUI was originally derived from the open source IMUNES project from the University of Zagreb as a custom project within Boeing Research and Technology’s Network Technology research group in 2004. Since then they have developed the CORE framework to use Linux namespacing, have developed a Python framework, and made numerous user and kernel-space developments, such as support for wireless networks, IPsec, distribute emulation, simulation integration, and more. The IMUNES project also consists of userspace and kernel components.

CORE has been released by Boeing to the open source community under the BSD license. If you find CORE useful for your work, please contribute back to the project. Contributions can be as simple as reporting a bug, dropping a line of encouragement or technical suggestions to the mailing lists, or can also include submitting patches or maintaining aspects of the tool.